Theoretically, the fact that Marvel’s core Star Wars comic takes place in between Episodes IV and V prevents writer Jason Aaron from getting his hand son Yoda. But Aaron isn’t letting chronology get in his way, as the series’ current arc flashes back to one of Yoda’s Episode I-era adventures. The change in both setting and cast serve as a welcome change of pace, though at this point the story’s lack of depth makes it seem like it would have been better-suited for the single-issue treatment. The disappointing visuals also severely limit the impact of this flashback adventure.

The novelty factor is the main element in this arc’s favor. The fact that this entire issue unfolds on a remote world marked by Stone Age technology and populated entirely by bloodthirsty children certain sets it apart from the crowd. Despite the lack of Sith Lords, Battle Droids or other familiar Prequel Trilogy trappings, Aaron is able to use this low-key setting to craft a challenge worthy of the great Master Yoda. It’s rare for this venerable Jedi Master to feel like the underdog, but he does here.

That all being said, there’s still not enough meat to the conflict. It’s simple and straightforward enough that Yoda’s misadventure seems better suited to the one-and-done format of Aaron’s various Obi-Wan Kenobi flashbacks. There’s also the unavoidable problem that Yoda’s distinctive speech patterns tend to become grating the more he’s in the spotlight. He’s not a great lead character for that exact reason. With at least three more issues left to go in this arc, it’s clear that new twists and complications are needed to give it a momentum boost. 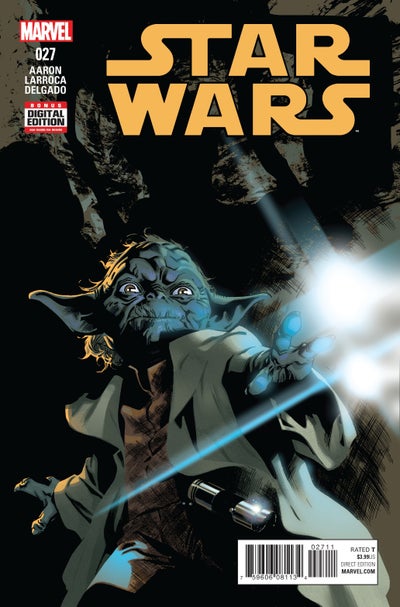 This is hardly Salvador Larroca’s first foray into the Star Wars universe, but this issue and its predecessor are by far his weakest efforts. Larroca’s work is suitably cinematic in its framing and page construction, but his great flaw has always been his reliance on photo-referenced characters. It was bad enough when Larroca routinely borrowed iconic shots from the OT films for his Darth Vader issues, but at least that book was dealing with an armored, faceless protagonist and a cast comprised mainly of original creations. Here, the protagonist is one of the most recognizable aliens in the franchise. Every image of Yoda in this book is instantly recognizable from the films. Worse, these hyper-realistic depictions of Yoda always clash with the comparatively spartan environments and characters around them. There’s a distracting Uncanny Valley effect at work in nearly every panel.

The latest Star Wars story arc certainly has the novelty factor working in its favor, as it takes a break from the post-Episode IV era to explore a lost Yoda adventure. Unfortunately, this conflict has yet to show enough depth to justify such an in-depth treatment. Worse, the lackluster art is doing little to bring this flashback tale to life.